The major research interest of my laboratory is to understand host-pathogen interactions and the molecular basis for pathogenesis of two human infectious agents Mycobacterium tuberculosis and Japanese Encephalitis Virus.

There were an estimated 8.8 million new cases of tuberculosis in 2005 (TB) with 1.6 million deaths. The problem of TB is increasing worldwide due to prevalence of multi-drug-resistant strains and coinfection with human immunodeficiency virus. An estimate in 1998 held that there were 6.7 million new cases of and 2.4 million deaths from tuberculosis each year, the latter exceeding those from malaria, AIDS, and all tropical diseases combined, making tuberculosis the world’s single largest killer. Mycobacterium tuberculosis is a facultative intracellular pathogen that multiplies within the cytocidal intracellular environment prevailing within the macrophage and successfully down regulates the functions of the macrophage that normally bring about the death of the invading organisms. Mycobacterium tuberculosis perhaps achieves this by specific expression of certain genes while growing within the macrophage. To identify such “differentially expressed genes” we took both immunological and molecular biological approaches. A genomic DNA expression library of a local field strain of Mycobacterium tuberculosis was constructed and screened with sera from TB patients which yielded several genes that are encountered by the host’s immune system during an active infection. We have also attempted to identify differential genes of M. tuberculosis using techniques such as DDRT-PCR and subtractive hybridisation. We showed successful use of a novel technique to efficiently polyadenylate in vitro the 3’ ends of messenger RNAs on polysomes of prokaryotic organisms and used it to identify host specific genes of M. tuberculosis. A new promoter in the M. tuberculosis genome that functioned efficiently in E. coli was identified, characterized and used to construct a vector that allowed its use to drive expression of heterologous genes in M. tuberculosis and in BCG, the latter holding promise for the development of BCG-based multivalent vaccines. The immunology of M. tuberculosis infections in humans and development of TB vaccines superior to the currently used BCG is another major area of study in our laboratory. Antigens coded by several novel genes of M. tuberculosis identified in our laboratory were found to elicit human T cell responses of the TH1 phenotype and have afforded protection against an experimental challenge in the guinea pig animal model. These vaccine candidates will be taken forward for clinical trials. The ability of these antigens to prime CD8+ T cell responses, has excited interest in the cell biology of how these antigens access the MHC class I presentation pathway of the infected macrophage despite sequestration of the bacilli within vacuoles. We are using GFP-tagged genes inserted into the M. tuberculosis genome to follow the movement of these proteins within the infected macrophage using confocal microscopy.

tuberculosisis among the most successful pathogens known to humankind and kills several million victims annually worldwide. Decades of research has suggested that the poor efficacy of the only available vaccine against TB, the attenuated M. bovis-BCG, is multi-factorial and includes loss of several virulence genes with resultant inability to overcome the non-beneficial immune responses to pre-existing environmental mycobacteria. Identifying the beneficial components of BCG that modulate innate immune cells as well as weeding out deleterious components of BCG that attenuate protective responses remain the focus of our research efforts. We have also used BCG as a vehicle for testing the contribution of genes from M. tuberculosistowards virulence. In this regard, we identified Rv1860, a glycoprotein of MTB as a major contributor to inhibiting dendritic cell activation and subsequent TH1 and TH17 polarization of T cells. Rv1860, when expressed in BCG abrogated its protective efficacy in the guinea pig animal model, an effect that we showed was mediated through inhibition of dendritic cell functions. A comparison of mouse primary bone marrow derived macrophages (BMDM) and dendritic cells (BMDC) showed that Rv1860 inhibits PI3 Kinase activation and autophagy pathway in BMDC whereas in BMDM, caspase activation and PARP cleavage were inhibited. This differential effect on macrophages and dendritic cells led to suppression of DC function while leading to increased secretion of inflammatory cytokines by macrophages. Thus, the pathogen prevents priming of adaptive T cell responses, while using macrophages to create the inflammatory environment at sites of infection which is beneficial to the pathogen.

Glycoproteins of MTB contain simple mannose residues linked by alpha 1-2 or 1-3 linkages attached to threonine residues of the proteins, a function carried out by protein mannosyltransferase (pmt; Rv1002c). Rv1860, however, differentially elicited a very strong polyfunctional CD8+ T cell response in healthy latently infected individuals, which bodes well for inclusion of this protein in the non-glycosylated form, in improved TB vaccines. Towards this end, we are currently generating pmt mutants of BCG which express the nonglycosylated Rv1860. CD8+ T cell s play a vital role in preventing reactivation of latent TB and hence are crucial in endemic settings such as India where the vast majority of the population is already infected with MTB.

Japanese encephalitis virus (JEV), a member of the mosquito-borne encephalitis complex of the family Flaviviridae is the principal cause of viral encephalitis over a large part of southern and eastern Asia resulting in 35,000 cases of encephalitis and 10,000 deaths annually. The genome of JEV is a single stranded, positive-sense RNA of approximately 11 kb in length that codes for a single large polyprotein, which in the infected cells is proteolytically processed into at least ten mature structural and non-structural proteins. We characterized for the first time the biochemical and kinetic properties of the flaviviralreplicase obtained in a membrane-bound form from virus-infected cells and delineated the architecture of the viral replication complex within host membranes that serve as sites for viral RNA synthesis. The orientation of viral replicase proteins that carry out this major function within the double membrane vesicles have also been deciphered. We have also demonstrated the unexpected presence of viral RNA synthesizing activity within the nucleus of 3 flaviviruses, the human pathogens JEV, Dengue and West Nile viruses. This along with the dependence of the virus on the nucleus of the infected host cells opens up novel avenues for ati-viral interventions. Extensive analysis of the human immune response to JEV antigens among individuals living in areas endemic to JEV has revealed the target antigens of human CD4+ and CD8+ T cell responses to be the non-structural proteins NS3 and NS1, as also the vital role played by interferon gamma and perforin in protection against encephalitis.

We showed for the first time that the highly reorganized membrane structures form double membrane vesicles that surround the viral replicase within cells infected with Japanese encephalitis virus, Dengue and West Nile viruses, which are serious emerging human pathogens. Our convincing demonstration that flaviviruses use the nucleus of infected cells as a second site for viral RNA synthesis, makes it essential to identify drugs that can inhibit the viral replication in 2 different sites, namely the cytoplasmic membranes and the nuclear compartment. Our current focus is to understand the role of the low abundannce viral NS1’ protein, which is a product of ribosomal frame shifting during translation of the viral polyprotein. We have developed specific antibody reagents that should allow us to study a possible role for the NS1’ protein in viral RNA synthesis as well as identify host proteins that interact with viral NS1’ protein.

During natural human infections with JEV, we showed in collaboration with the government hospital (VIMS) at Bellary, Karnataka that the structural proteins of JEV, namely capsid and envelope, predominantly elicit a CD4+ T cell response while cytotoxic CD8+ T cells important for protective immunity, are focused on the NS3 protein. We have also successfully identified human cytolytic antibodies specific to NS1 of JEV that have the potential to reduce virus production from infected cell monolayers by as much as 20 fold. Using the live attenuated vaccine strain SA-14-14-2 of JEV, we are currently studying the role of endoplasmic reticulum (ER)-localized viral protein folding pathways that modulate host cell ER stress and lead to autophagy. Our studies reveal that these pathways are essential for eliciting virus-specific CD8+ T cells, which is actively suppressed by wild type JEV. 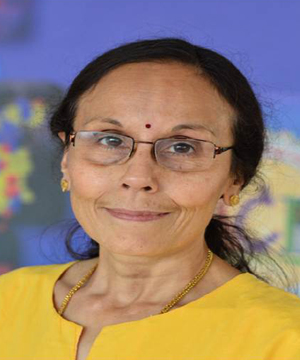