Cellular microenvironment is compartmentalized into biomolecular condensates of RNA binding proteins (RBPs) and RNA, like nuclear splicing speckles, nuclear stress granules and cytoplasmic stress granules. These condensates are dynamic which exchange components with the surrounding, behave like liquid droplets and are formed by a physicochemical process known as liquid-liquid phase separation. Importantly, changes in phase behavior of condensates are associated with pathology in many neurodegenerative conditions. We focus on understanding the role of RNA interaction in formation and function of biomolecular condensates.

The phase separation of the biomolecular condensates is known to be driven by low complexity domain containing RBPs and condensate specific scaffold RNA. In cells the RBPs are always associated with RNAs, in fact the mammalian cells are filled with RNAs, around 20-30 picogram of RNA per cell. How do the specific and non-specific interaction of RNA drive the phase separation of LC domain containing RBPs and function of condensates?

We will use mammalian cell culture and in vitro reconstituted system to address the following specific aims: 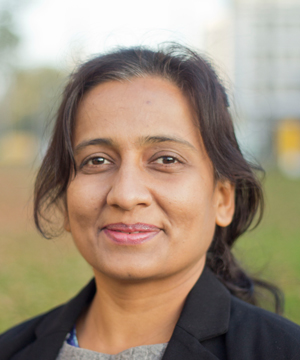